When I was in the process of buying this house, everybody said, “you can move right in and not change a thing!”

Of course I had to change everything.

The first thing I had to do was pull out the horrifyingly cheap and ugly little vanity that took up most of the bathroom and the delightful light bar that matched it.

Then I launched into taking out the kitchen cabinets which at first glance looked clean and bright, but in reality were hastily assembled from cardboard boxes and were too narrow to even stash the dinner plates.

I only stopped pulling them out when my brother called and told me to quit it because I had to leave the one holding up the sink. Then I built myself a little base unit and hung some shelves on the wall and voila! Rudimentary kitchen!

I joyously bought a dishwasher and the whole thing went sour, but owing to an insurance settlement with the evil HHGregg, I was able to buy extremely nice new cabinets, which my brother and his helper installed for me.

At that time, I bought laminate countertops (which I have been perfectly satisfied with) because I didn’t know what I really wanted and I couldn’t have afforded it if I did. And I knew that I wouldn’t regret pulling out $250 worth of laminate when I did finally make up my mind.

So today, some time this afternoon, some men are coming over here to pull out my laminate counters and replace them with marble. 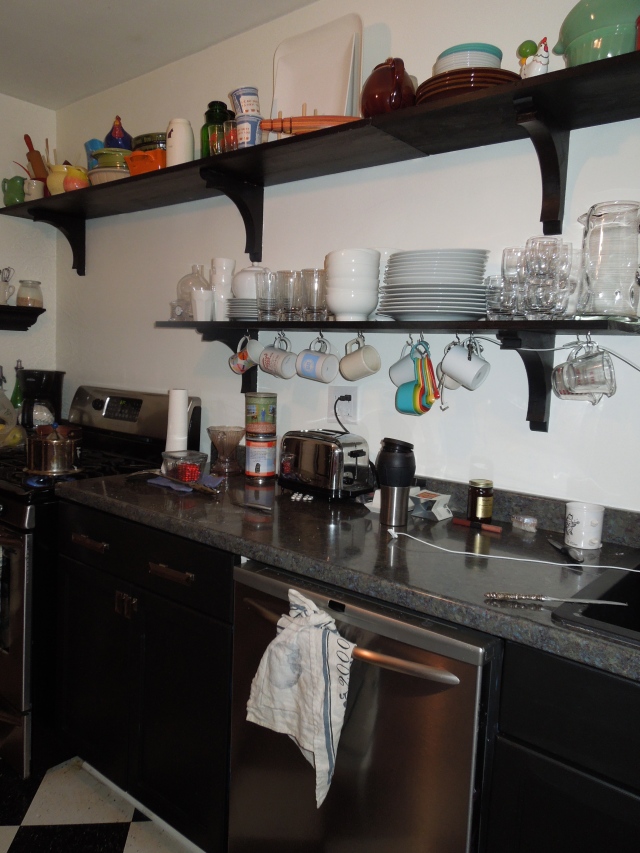 Several hours from now, I’ll have folded that dishtowel.